Retaining walls are structures designed to bound soils between two different elevations, therefore they are mainly exposed to lateral pressures from the retained soil plus any other surcharge. Competent design of retaining walls can maximize land use and substantially increase property value. This article discusses the required steps in the design of either concrete or masonry un-piled cantilever retaining walls. Our software ASDIP RETAIN will be used to support the discussion. 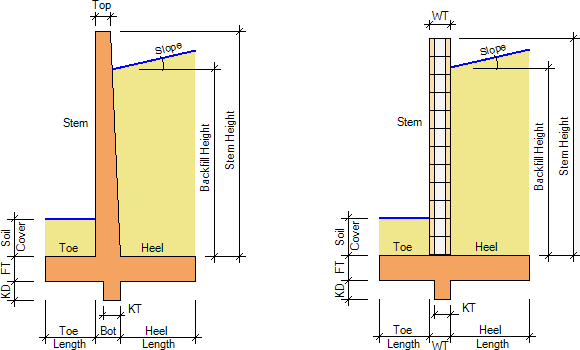 What loads act on a retaining wall?

In addition to the backfill, retaining walls may be subject to surcharge loads at the top of the retained mass. A surcharge may be either uniform or a strip load. A strip load describes a distributed load within a limited width, and the pressure distribution is calculated using the Boussinesq approach. The stem may also have concentrated loads at the top.

The water table position may also have a big impact in the design. When the stem extends above backfill, the retaining wall may be exposed to wind load. When retaining walls are located in seismic zones the seismic effects may be considered by utilizing Mononobe-Okabe approach. ASDIP RETAIN lets engineering professionals quickly model retaining wall loads. The image below depicts the external loads on a typical retaining wall.

What lateral pressure theory to use?

There are two well-known classical earth pressure theories: Rankine and Coulomb. Both theories provide expressions for the pressure states described below. Rankine is a simplified version of Coulomb. Rankine ignores the friction between the wall and the soil, and it assumes a vertical wall face. Coulomb takes all these factors into consideration.

The lateral pressure can be defined in terms of the lateral coefficient K times the vertical pressure. Depending on the relative movement of the wall and the backfill, three different states of lateral earth pressure may develop:

The left image below is a graphical representation of the shear strength of the soil and the corresponding lateral pressures for the conditions described above. Note that the active pressure is smaller than the passive pressure for a given soil. 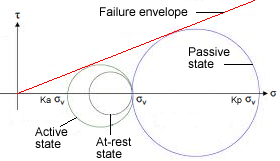 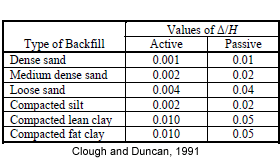 ASDIP RETAIN is able to use any of the theories described above. In addition, the Equivalent Fluid method may be selected, which assumes the backfill as a fluid of a given density.

How do you check the overall stability?

There are four basic instability modes to be checked for the service load combinations: Sliding, Overturning, Soil bearing, and Global instability, as shown schematically in the picture below.

Sliding – The backfill exerts a lateral pressure against the wall. This sliding force is resisted by the friction between the underlying soil and the footing, and by the passive pressure at the front of the wall. When more sliding resistance is required, a shear key may be provided. The factor of safety against sliding equals the resisting force divided by the driving force, and the minimum value should be 1.50.

Overturning – The overturning moment from the applied forces must be resisted by an opposite moment produced by the vertical forces, including the wall selfweight and the weight of the backfill over the heel. The factor of safety against overturning is defined as the resisting moment divided by the overturning moment, and the minimum value should be 1.50. As an example, the picture below shows the ASDIP RETAIN overturning calculations. 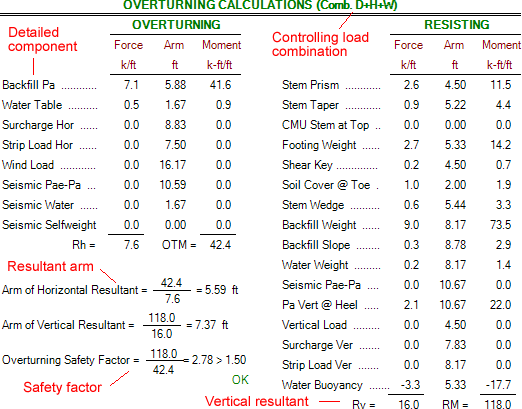 Global instability – It assumes that a failure surface develops under the wall, causing a massive disturbance and movement of the soil along this surface. This check is a complex analysis that falls in the field of the geotechnical engineering.

ASDIP RETAIN generates the image shown below, with the magnitude and location of the loads that affect the stability analysis, sorted by load combination. The calculated safety factors are also provided by the software for immediate check.

How do you design the stem?

The stem is mostly subject to bending and shear forces. It acts as a cantilever beam, so the maximum moment occurs at the top of the footing, and the shear must be checked at the critical section located a distance d above the top of the footing. The lateral earth pressure has a triangular distribution, whereas the surcharge pressure has a rectangular distribution. The seismic pressure is trapezoidal with the resultant applied at 0.6H, as shown below. Note that the factored load combinations are used in this stage.

The maximum shear is then the sum of the horizontal loads, and the maximum moment equals the sum of the load times the corresponding lever arm. The main reinforcing steel should be placed at the backfill side. The image below shows the different pressures on the stem of a typical retaining wall, sorted by load combination. Note the shear and moment diagrams generated by ASDIP RETAIN software where the shaded area is the structural capacity of the stem. If the stem is overloaded at any point, the problem can be identified immediately.

In ASDIP RETAIN the stem material can be concrete, masonry, or a combination of both. The required reinforcing steel is calculated per the latest design Codes provisions: ACI 318 for concrete and TMS for masonry. To optimize the design of cantilever retaining walls, the stem can be tapered and alternate vertical bars can be cut-off at a certain height.

How do you design the footing?

The heel is a cantilever beam subject to the vertical loads acting on the backfill, including the backfill weight and any surcharge. Under the heel there is a bearing pressure acting upwards. However, it’s common practice to conservatively ignore this pressure and design the heel for the downward loads only. ASDIP RETAIN provides the option to either ignore or consider the upward pressure on the heel. The main reinforcing steel at the heel should be placed at the top side of the footing.

The maximum soil bearing pressure is expected to occur under the toe. The toe acts as a cantilever beam subject to an upward pressure, generally trapezoidal, from the soil reaction. The main reinforcing steel at the toe should be placed at the bottom side of the footing. The picture below shows the ASDIP RETAIN calculation of a typical retaining wall footing. Note the different controlling load combinations. 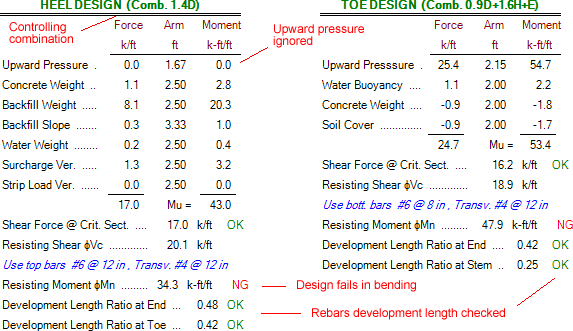 The shear key may be controlled by shear or bending. The load is calculated as the passive pressure acting against the face of the key. The picture below shows the construction information of a typical cantilever retaining wall. Note that alternate vertical rebars have been cut-off in order to optimize the design. 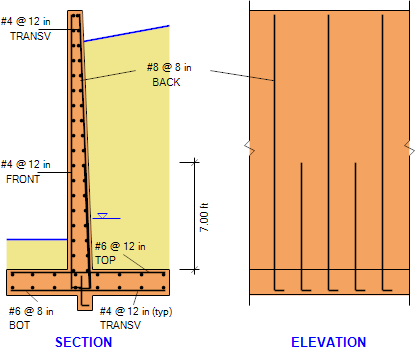