Columns are structural compression members which transmit loads from the upper floors to the lower levels and then to the soil through the foundations. Since columns are supporting elements, failure of one column in a critical location can cause the progressive collapse of adjoining floors. Normally columns are subject to combined bending and axial load. These moments are generally due to unbalanced floor loads, eccentric loads such as a crane, lateral loading such as wind or earthquake, etc.

How do you calculate the column strength?

Failure in concrete columns may occur either as a result of material failure or by loss of lateral structural stability. When the strength depends only on the section properties, it is classified as a short column, as opposed to the slender column whose capacity is affected by the secondary moments due to buckling. In the design of concrete columns it’s easier to visualize the behavior of a short column first, and then analyze the slenderness effects.

The capacity of reinforced concrete sections to resist combined axial and bending loads can be expressed by a Pn-Mn interaction diagram, where each point of the curve represents one combination of the nominal strengths corresponding to a particular neutral axis location. Each point is calculated as follows: based on the maximum compressive strain (0.003 per ACI) and the location of the neutral axis, find the strain at each level of reinforcement and then calculate the compression block and the stress at the rebars. Finally, the axial force Pn is computed by summing the concrete and steel forces, and the moment Mn is computed by summing the moments of these forces about the centroid of the cross section. This procedure is followed with multiple locations of the neutral axis until the interaction diagram is constructed, as shown below. 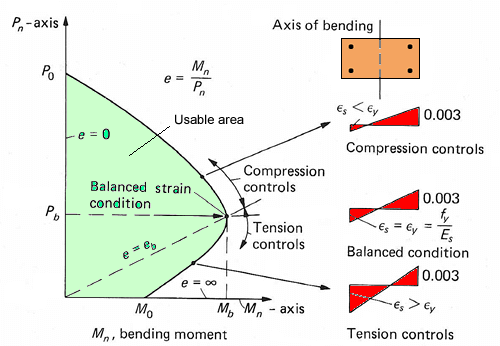 ASDIP CONCRETE generates the interaction diagram of either a rectangular or circular column. The software uses either the actual parabolic concrete strength curve, or the Whitney simplified block. This rectangular block, although simpler, is not correctly applicable to non-rectangular compression areas, since the centroids of the actual and idealized blocks do not coincide.

How is the column strength affected by its slenderness?

The column slenderness is defined in terms of its slenderness ratio kLu/r, where the term kLu is called the effective length and the factor k modifies the actual column length to account for end restraints other than pinned. The value of the effective length factor k varies between 0.5 and 2.0, depending of the buckled shape of the column for different end conditions. The parameter r is the radius of gyration of the cross section.

In practice, columns are rarely found as isolated members, but they are part of rigid frames together with other structural members such as beams. When the frame is laterally braced, the joint translation is prevented by shear walls, attachment to adjoining structures, etc, and such a column is called Non-sway, as opposed to a Sway column, where the lateral stability is dependent of the stiffness of the members of the frame.

When a slender column is axially loaded, it tends to buckle, which creates a deflection Δ. This deflection times the axial load produces an additional (secondary) moment, which in turn increases the deflection, which in turn increases the moment, and so on until the system converges. This is called a P-Δ analysis. A material failure will result when a particular combination of load P and moment P(e+Δ) intersects the interaction diagram, as shown in the figure below. Note that the additional moment actually reduces the axial capacity of the column.

How are the second-order effects accounted for?

The ACI establishes, for both sway and non-sway columns, the lower-bound slenderness limits, below which secondary moments may be neglected (short column design). When required, the Code recognizes the following methods to account for slenderness effects:

The moment magnification method is different for sway and non-sway columns. For braced columns, the magnified moment is Mc = δns M2, where δns is the magnifier and M2 is the maximum moment at the column. The factor δns = Cm / (1 – Pu/0.75Pc), where the critical load Pc considers the stiffness EI of the column.

ASDIP CONCRETE calculates the magnified moments for each load combination of either a sway or non-sway column.

What about biaxial column design?

When a column has moments about the two axes, it’s necessary to generate a biaxial interaction diagram. To do so, the cross section is rotated multiple times about its centroid, and the uniaxial diagram described above is generated at each new rotation. The end result is a 3D interaction diagram.

To check the adequacy of the design, the actual factored and magnified loads should be compared to the structural strength of the column, as described by the interaction diagram. The images below show the uniaxial and biaxial interaction diagrams generated by ASDIP CONCRETE. 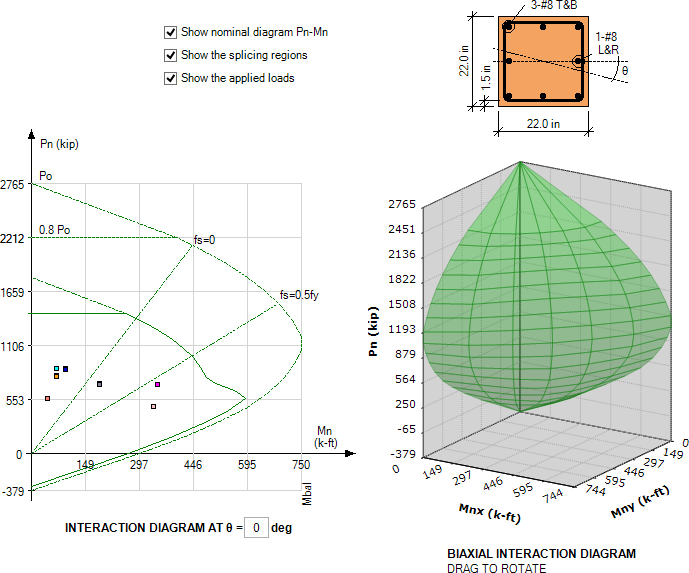 Columns are very important structural elements. The design of slender concrete columns subject to axial load and biaxial bending may be cumbersome and time-consuming. The generation of the interaction diagram may become very complex, particularly for biaxial columns. ASDIP CONCRETE includes concrete column design, with multiple options to optimize the design easily.

Detailed information is available about this structural engineering software by visiting ASDIP CONCRETE. You are invited to download the Free 15-day Software Trial, or go ahead and Place your Order.