Strap Footing: How to Calculate the Bearing Pressures

Strap Footing: How to Calculate the Bearing Pressures

ASDIP FOUNDATION includes the design of concrete strap footings. This structural engineering software is based on the latest ACI 318 provisions. This post explains the calculation of the soil bearing pressures in a typical strap footing.

A strap footing usually supports two columns, so it’s a special type of combined footing. If a property line exists at or near the edge of an exterior column, a normal isolated footing would be placed eccentrically under this column and it would tend to tilt. This problem may be prevented by connecting this footing with the adjacent interior footing by a strap concrete beam. The use of a strap footing may be justifiable where the distance between columns is large and a normal combined footing is impractical due to the required large excavation. 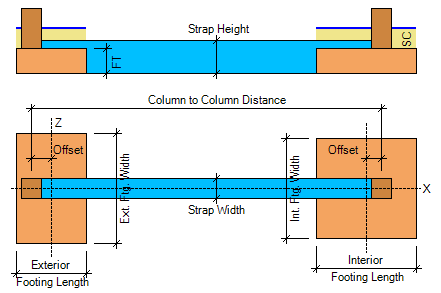 How do you calculate the strap footing bearing pressures?

In the design of a strap footing the system is assumed infinitely rigid and acts as a unit, so that the longitudinal bending moments are resisted entirely by the strap beam. The calculation of the bearing pressures implies the calculation of the upward reaction forces at the center of both footings by taking moments about the other footing, by simple Statics, as shown below. Even when there’s an eccentricity between the applied loads and the reactions, the footings cannot rotate due to the restraining action of the strap beam between the two columns.

Note that by doing this the system actually works as a unit and some loads may be transferred from one footing to the other, for example the exterior reaction might not necessarily be equal to the exterior loads (P1 ≠ R1 and P2 ≠ R2), where P1 and P2 represent the applied service loads. As a result, since the reactions are applied at the center of the footings, the bearing pressures are uniformly distributed.

Once the service reactions are calculated, the two footings may be sized so that the resulting bearing pressures are under the allowable limits established in the soils report. ASDIP FOUNDATION accurately calculates the soil bearing pressures under the exterior and interior footings for the applied service loads, as shown in the picture below.

For a more detailed discussion of the design of strap footings, please read my blog post Strap Footings: A Very Useful Structural System.

Detailed information is available about this structural engineering software by visiting ASDIP FOUNDATION. You are invited to download the Free 15-Day Software Trial or go ahead and Place Your Order.